One of the things I like best about normative signs is the variety of ways of saying the same thing. Look at this trio of signs, for example, posted at a hospital parking lot in Toronto: 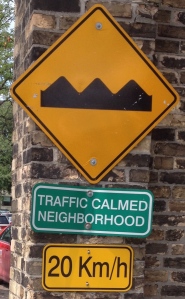 All three of them embody the same message, the same request: “Slow Down.” But none of them actually says that.

The first is a pictogram, depicting speed bumps, effectively warning you that failure to slow down will do damage to your car. Buyer beware.

And the third sign indicates that the speed limit (not legally binding, I think, because it’s private property and the sign is in yellow) is just 20 kilometres per hour. 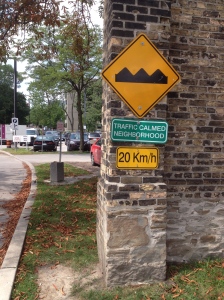