This is on a street in Toronto. Most of the lamp-posts along this street have “No Parking” signs. A few of them — maybe every third post — have additional signs saying why you’re not allowed to park there, namely because it’s a Snow Route, a road that gets priority snow-removal during especially big snowfalls.

In general, it’s helpful to let people know the rationale behind important policies, so they don’t fall prey to the assumption that those policies are arbitrary or stupid. It’s often hard to do that with street signs, where the obvious priority is to be brief. 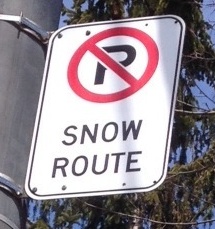