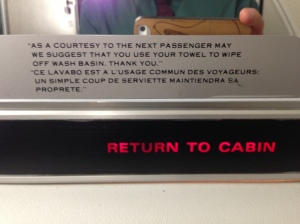 After I posted on the bathroom courtesy sign in airline bathrooms, Wayne Norman sent me this similar-but-different sign, which is in the bathroom on an old American Airlines MD-80.

The sign I originally posted (reproduced below — click to enlarge) asks people to wipe the counter as a courtesy to the next customer. The one above, sent by Wayne, makes the same request. What’s interesting is the French version on each. On the sign below, the translation says, roughly:

“Out of respect for other users, please wipe the sink before throwing away your towel.”

“This sink is for the common use of travelers. A simple wipe of the towel will maintain its cleanliness.”

In this version, wiping the counter isn’t just courtesy; it’s a matter of solidarity among people using a shared resource.

Kudos to Wayne for sticking around to take this picture for me, in spite of the other red normative sign apparently flashing at him at the time!