This is in a subway station in Toronto. It’s the pairing of signs (I don’t know whether it is intentional or not) that I find interesting.

In essence, the authorities who posted these two signs are effectively asking people not to kill themselves in either of two ways — one fast, one slow.

More seriously: it’s also interesting that the normative force behind these two signs is quite different. The lower one — No Smoking — has the force of law, and is backed by fines. The upper one — Mind the Gap — is “merely” very very good advice. Does pairing them like this have some effect on the psychological force of one or the other? 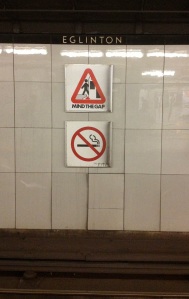