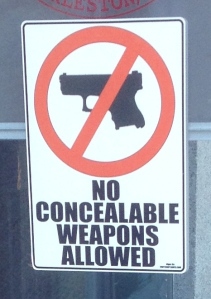 This is not the sort of sign one sees in Canada (where I live), which is perhaps why I’m baffled and amused by the wording. Is it really “concealable” weapons they want to exclude? If you’re going to specify subsets of lethal weapons to exclude, I can understand why you don’t want concealed (i.e., hidden, secret) weapons. But why concealable? Is the implication that it is OK to walk in with a pump-action shotgun, but not a 6-shooter on your hip? After all, the former aren’t (easily) concealable, but the latter are concealable, even if not concealed.

More to the point, perhaps, is whether you want people trying to parse the concealed/concealable distinction as they approach the door.

I realize this is touchy stuff in many parts of the US, and I’m not posting this to engage in a debate over the right to bear arms. I just find the sign verbally odd.